The BaseSpace Native App Engine offers the simplest way to get your computation-focused application into the hands of BaseSpace users. Built on top of our existing open RESTful API and best of breed open source technology, a Native App can be written in any language and simply needs to run within a Linux environment. Contrary to BaseSpace Web Apps, your Native App has no need to make API calls or to integrate with one of our BaseSpace SDKs as all these mechanics are handled for you. This simplified model allows you as an app developer to focus on the core strengths of your app without being bogged down with infrastructural complexities, security, data movement, and API integration.

How do Native Apps work?

The following diagram is an overview of the Native Apps workflow: 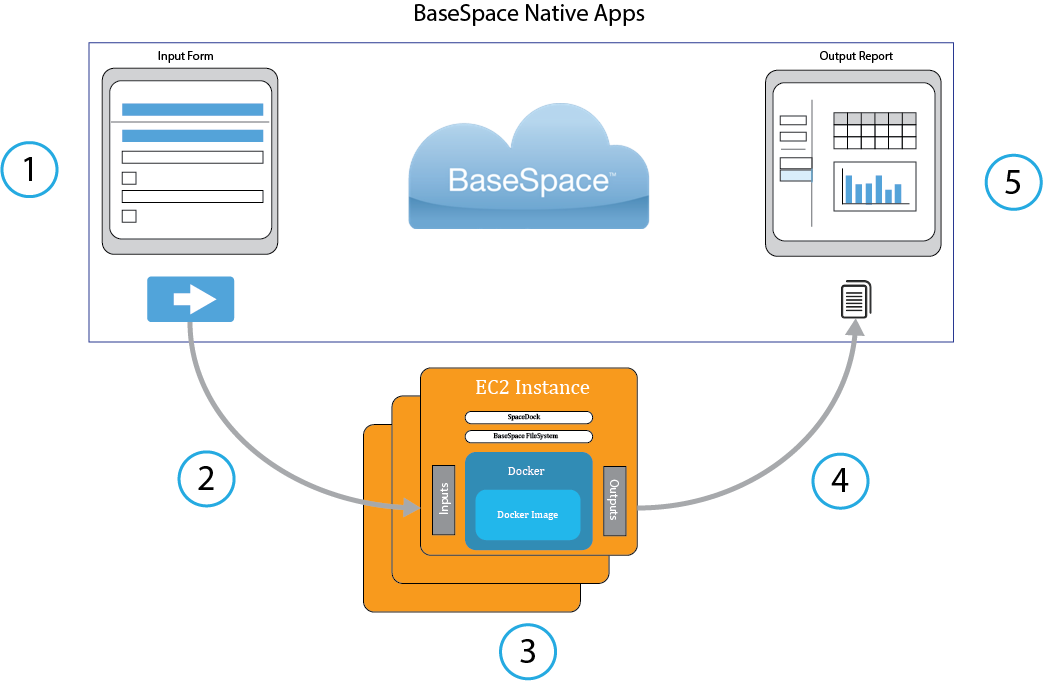 The Native App engine does not replace our support for Web Apps (or desktop apps) as there are distinct benefits for both. Where Web Apps allow for a fully customizable and interactive user experience, Native Apps are designed for your non-interactive computation of BaseSpace data with the results being uploaded and presented back to BaseSpace users.

Three Components of a Native Application

Your app may start from a sample, a VCF file, the full output of another app, or whatever data exists in BaseSpace. It may also have a suite of options that need to be exposed as well. Our Formbuilder tool allows you to dynamically create a form that satisfies all of your app’s requirements. We have a full suite of configurable standard controls like textboxes, checkbox, dropdown, etc, and BaseSpace-specfic controls too. These can be put together in any way you want with a powerful rule engine to help validate all of your business rules. Below is a screenshot of this tool in action. 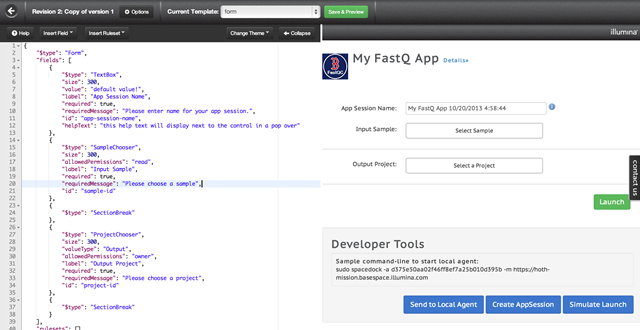 In the BaseSpace Developer Portal, once you have created a new application, you will see the Formbuilder tab available. You can use this to create an input form for your application.

In addition, the Formbuilder is also used for local testing and debugging of a Native Application using the Send to Local Agent button.

For more information please refer to the Formbuilder documentation.

Docker is an open source Linux container engine that allows you to create portable application images. These images will run exactly the same on any hardware or virtualized hardware that Docker itself can run on. This means your app is completely portable to environments like Amazon EC2, Rackspace, OpenStack, or just a local Linux machine.

To learn more about Docker, visit the link above or try out the Interactive Tutorial!

In the Formbuilder tool you can specify your command line with options from the form that you built.

To understand how to build your docker image for BaseSpace, please refer to the Native App Conventions Documentation. This documentation provides more insight into the conventions that have to be followed within a Native app to interact with BaseSpace appropriately.

Now that you’ve got your app running, you can create a nice set of reports for users so they don’t just see a list of files after running your app. We built a report builder tool that gives you the full power of HTML5 and ultimate flexibility to create a rich user experience. Accessing data from your analysis is done via the Liquid templating language (from Shopify) and a set of extensions that we’ve added to it. 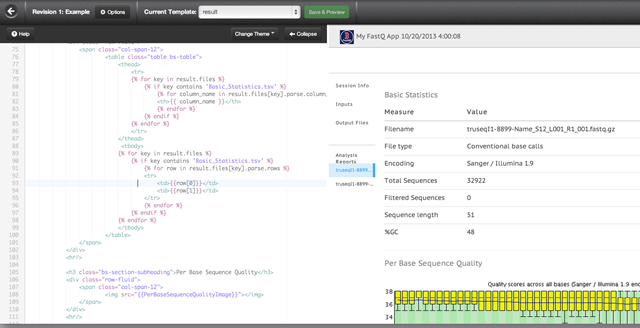 For more information please refer to the Reportbuilder documentation.

For developers or users who would just like to understand more about Native Apps, we have put together a quick guide that will take you through many of the processes that a developer would have to do in order to create a basic Native Application.

The first tutorial is a beginner-friendly tutorial where the developer creates the FastQC application. The FastQC application is an open-source project that we have adapted as a Native App in BaseSpace. In the first guide, you will be able to send a job from BaseSpace to your machine, watch the FastQC App execute locally, and view the output data that was uploaded to BaseSpace.

The second tutorial is an advanced tutorial where the developer creates a new app from scratch using an example python script. This tutorial is very involved and requires coding. You will have created a new docker image using example code, created a new form, created a connection between BaseSpace and the app, and finally to create an output report for the results that are uploaded.

Here is a link to the Guides: Example Native Applications

The Native App Infrastructure in BaseSpace provides features for the developer that streamline processes such as gaining permission to the user's data, downloading input data to the machine where the app is running, reporting errors/logs to the user, and uploading results back to BaseSpace. In order to use these features, the developer must follow some basic conventions while creating their Native app. For more information about this information, please refer to the Native App Conventions Documentation.

A developer may choose to implement these features a little differently, in which case the Rest API for BaseSpace can be used from within a Native app to have access to this information as well. This would be for developers who are interested in more robust solutions for upload/download or need additional functionality that the native app engine does not provide. For more information about using the Rest API, please refer to the BaseSpace Rest API Reference.

This is really just scratching the surface of what is possible with the new Native App Engine. We look forward to your feedback and are really excited about what’s to come!

For extensive documentation, here are some links: