Testing and Debugging your Native Application using the Formbuilder

When building your Native App, you will find the need to test your app locally using real data from your BaseSpace account.

Getting started with a new Native App and Form

Setting up your Local Development Environment

The following steps assume that you have the local development environment set up for Native Apps. This guide will not go through the steps for setting this up, but you can refer to this documentation to guide you through the process.

Once you have your Native App Virtual Machine running locally and have a terminal open that is logged into your virtual machine via SSH, you are ready to begin testing the application locally.

Using Developer Tools in the Formbuilder

You will now see the Developer Tools section in the right side pane of the Formbuilder window. 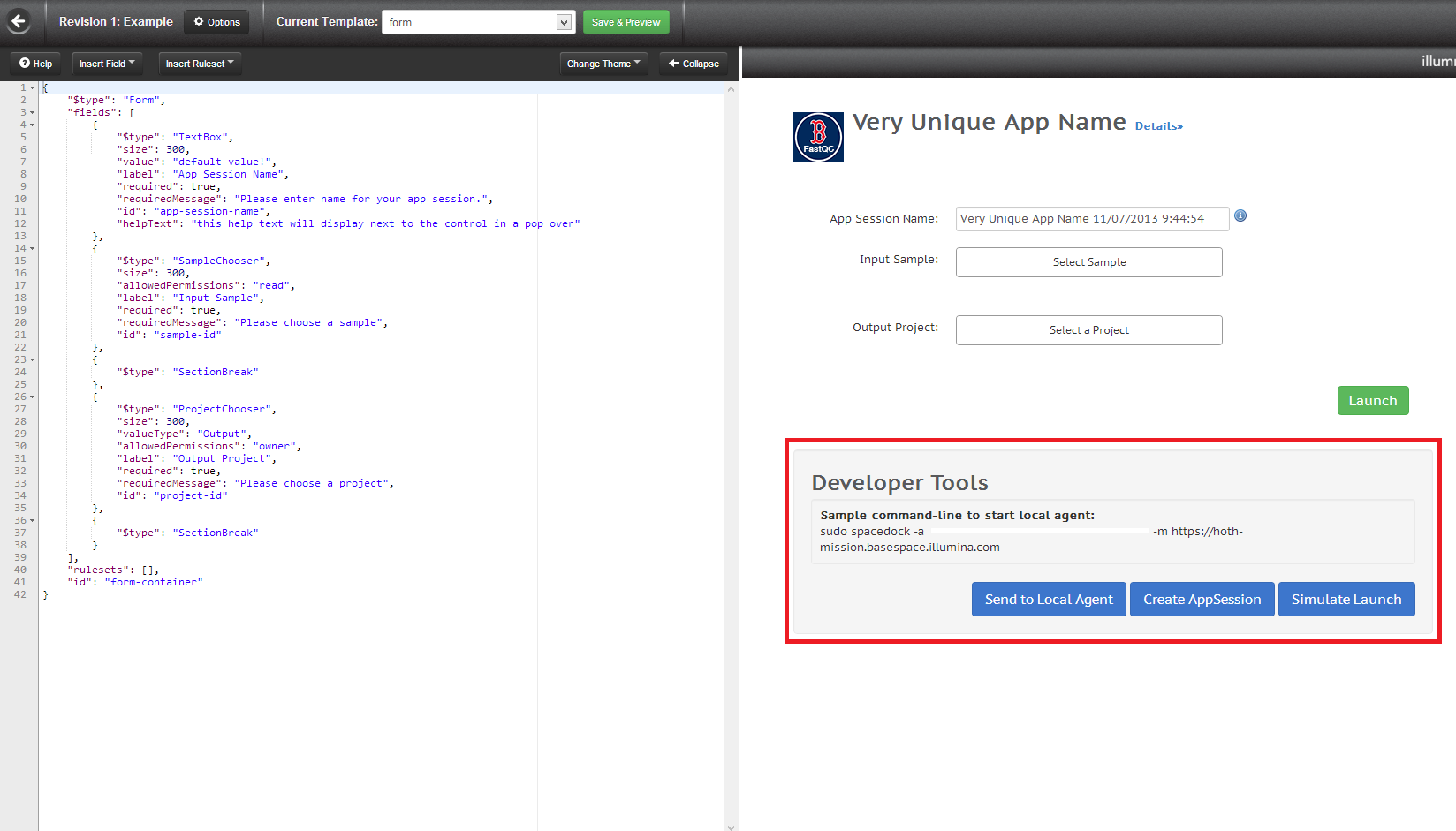 In this section, you will see the Sample command-line to start local agent:. Copy the contents after this command (e.g. sudo spacedock -a [agent_id] -m https://hoth-mission.basespace.illumina.com) into the terminal where you are logged into the virtual machine via SSH and hit enter, you should see a message that says something like Successfully pinged Docker service if this was completed successfully.

Now, you have pointed BaseSpace to your local Virtual Machine to run jobs that are submitted by the app in BaseSpace via the Send to Local Agent button in the formbuilder.

There are three buttons listed here:

The Simulate Launch option takes the developer to another page that shows the information that is created upon submittal of the form and the launch of the app. 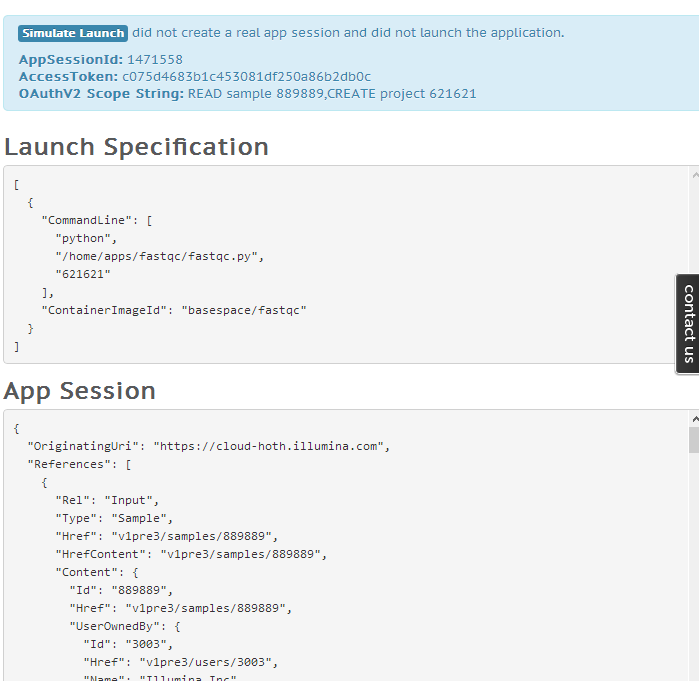 The Create AppSession option takes the developer to another page that shows the information that is created upon submittal of the form and the launch of the app. This option is different from Simulate Launch because this option actually creates the new AppSession instead of just simulating the AppSession that would be created, so you can access that AppSession via the REST API for BaseSpace if needed.

Otherwise, the page that the developer is taken to after clicking on this button is the same as the one for Simulate Launch except that the message at the top is different and indicates that an AppSession was actually created. 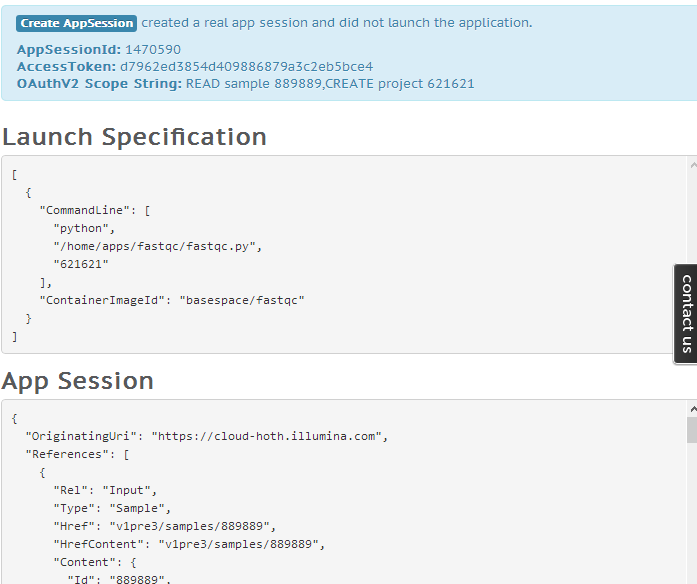 The Send to Local Agent option is slightly different from the other options in the Developer Tools. Clicking on Send to Local Agent will send the job from BaseSpace's job scheduler to the local Native Apps Virtual Machine that is running on your machine. BaseSpace will send this job to the Virtual Machine where you pasted the Sample command-line to start local agent information from the Developer Tools.

The job that BaseSpace sends to your local Virtual Machine will include all of the information that is generated via the Create AppSession and Simulate Launch options. The command-line argument in your callbacks.js function is fed to the Docker image once it is found or downloaded locally and then it is executed.

To use the Send to Local Agent option, you will need to follow these steps:

Native apps can be run on one Node or the process can be optimized to be run on multiple Nodes. The documentation will go through both scenarios.

This is a Single-Node analysis template, which means that the app will run on one node and that node will have all of the input data.

In the above example, we see the following actions in the callbacks.js file:

In addition to the above, the Callbacks.js function can also be used to specify running an analysis across multiple nodes.

In the above callbacks.js function, the samples variable is an array of multiple Samples. This array is iterated through in the following for loop and each Node gets a new Sample from the sample[i] value.

In the future, the callbacks.js function will also be used to specify compute requirements for your application.

The Launch option will launch the app in the BaseSpace Infrastructure instead of sending it to your local Virtual Machine. The job is sent to the BaseSpace Job Scheduler, which then finds or creates an Amazon Machine Image (AMI) to run the app. This AMI's specifications are similar to that of the Native Apps Virtual Machine that we provide. Once the AMI receives the job from the Job Scheduler, it downloads the Docker image to the AMI from the Docker registry and runs the command-line argument in the callbacks.js.

The Launch button is meant to test launch the app as a user would using BaseSpace infrastructure rather than your local machine with the Virtual Machine running.

Using the API to Test your Native App

The API can now be used to programmatically launch a native app. The details of this mechanism are described in the API Reference page under POST: applications/{id}/appsessions.

There are two ways to launch a Native app using this API, either in the BaseSpace infrastructure or on your local machine. In order to launch the app in the BaseSpace infrastructure, you will first need to submit the app for review and ask us for permission to launch. If you are using a local machine to launch the app, an AgentId can be provided with this request to send the job to your local machine. The AgentId is found in the Native Settings tab for your app in the developer portal.

You'll need an access-token and the Id of the application that you wish to launch. This access token can be found in the Credentials tab for any of your apps in the developer portal, with any of these access tokens you will be able to launch any apps that you have access to as a user or developer.

The API Reference will provide more detailed information about the process of lauching the app programmatically.