For a general overview of Native Apps, please refer to the Native App Overview.

This document covers the conventions of the Native Apps Infrastructure in BaseSpace. Much of these conventions fall into a service that we call SpaceDock. SpaceDock performs many functions for the app which will be covered below. From this document, you will learn the following:

When a Native apps job is submitted to BaseSpace, BaseSpace will spin up an AWS EC2 instance (or multiple instances) also with SpaceDock installed and your application will be started and your app will behave identically as on your developer VM.

While SpaceDock handles all of this automatically, provided that certain conventions are followed, a developer may want to further optimize these features. In these cases, the BaseSpace Rest API can also be used to perform many of these functions. In most cases though, no direct BaseSpace API calls will need to be performed directly by the app as SpaceDock is designed to take care of it for you.

How to get SpaceDock on your Virtual Machine

When a new version of SpaceDock is released, it will be available as a Debian package for download.

There are two methods to update SpaceDock.

If you are only updating the existing version of SpaceDock on your machine (or your virtual machine), please refer to the below information. In the future, we will release more information on how the SpaceDock package can be installed on any machine (not limited to the virtual machine.)

To get the latest version of SpaceDock on your machine, simply execute the following steps:

This will put the latest verion of SpaceDock on your machine.

If you are configuring your own Native Apps development machine, one of the steps you will have to do is to download SpaceDock.

To get SpaceDock on your machine:

What Does SpaceDock Do

This section will cover all of the developer-related features of SpaceDock.

SpaceDock's main feature is to poll BaseSpace for new Jobs for your application. SpaceDock is used to create a connection with BaseSpace.

To have SpaceDock poll BaseSpace for Jobs for your particular application, please follow these steps:

Based on the app's input form, BaseSpace will automatically ask for the permissions necessary to download input data and save results back to BaseSpace, the developer does not have to worry about this! SpaceDock will automatically gain permission to the user's data based on what is required in the form and store this permission while the app is running. Each form control dictates what level of access is needed for a given resource chosen by the user.

One of the first things SpaceDock does when running an app is to place the data chosen by the user in a location accessible to the app. SpaceDock creates a data folder in the Docker image containing two other folders, input and output.

The input folder will contain the following data by the time your application is started:

In addition, the app will not pre-download all of the input data if the BSFS option is enabled on the input form and will instead download the data as the app requests it.

Data can be made available to your container using 2 different mechanisms: pre-download of files or through a BSFS (BaseSpace File System) mount point.

Using BSFS to mount your data presents a number of benefits over the download option, which is why BSFS is now enabled by default when creating a new application in the developer portal.

Essentially, the developer has to simply add the following to their return value for their callbacks.js script:

This is shown in the following Single-Node example:

Here is an example of a Single-Node Native App's Callbacks.js script:

Note the Options array, which is used to pass the option "bsfs.enabled=true" in order to enable BSFS. The option may be removed in the event using BSFS is not desired.

When the Single-Node template is used for the Callbacks.js script, all input data is made available at the locations referenced above.

In this example, each node of the analysis is explicitly being assigned two Properties, the Input.Samples and Input.AppResults Properties. These are Sample and AppResult resources that were chosen in the input form by the user and are being retrieved by the Callbacks.js script via the dataProvider.GetProperty() method. These are full Sample and AppResult resources. In the for loop, we can see that each node is given the commandLine argument, containerImageId value which points to the Docker image, the properties field and an Options array. The properties field will add the specified Properties to that particular node, so in this case it would be on each node that is created per Sample. Note that the "bsfs.enabled=true" option in the Options array is set for each node in the multi-node launch.

The number of properties that can be passed to each node is currently limited to 25.

Furthermore, this example shows how the commandLine and containerImageId are set in each child node.

Report Status and Errors to the User in the Logs Window

When a user launches an app in BaseSpace, they are taken to the Analysis page where they are given more information about the Analysis that was launched. This Analysis page refreshes periodically and updates the AppSession Status and StatusSummary as well as the output Logs from the app. Here is an example: 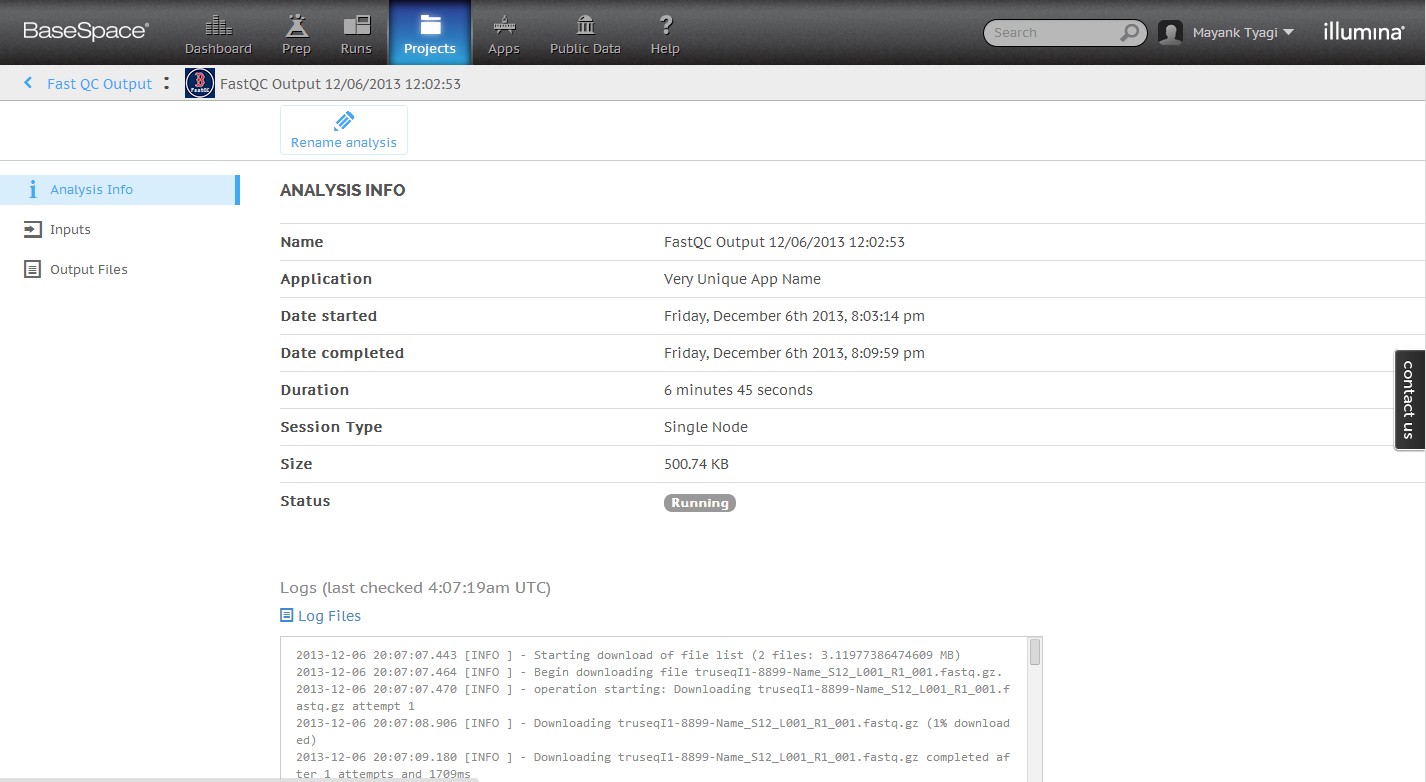 SpaceDock will automatically report some Logs to the window, including downloading input data, downloading the docker image, and uploading results back to BaseSpace. In addition to these automatic logs, the app can also write back custom messages to the Logs window.

Writing to the Logs window manually

Anything written to stdout will be written to the Logs window. This window isn't designed to show the entire application log but only a small buffer of recent activity.

If the app encounters a minor error but can still continue with the analysis, it may simply write back to the Logs window using the above example.

If the app encounters a fatal error from which the app cannot recover, the app should exit with a non-zero exit status code. This error will be reported to the User automatically in the Logs window and the session will be marked as Aborted.

From within a Native app, custom log files can also be uploaded back to BaseSpace. These files, once they are uploaded, are available via the blue Logs link on the Analysis Info page above the Logs window.

Custom log files can be written to the data/logs/ folder. Multiple file types are allowed, it is very flexible. The logs in this folder will be uploaded back to BaseSpace once the job ends, either through a Complete or Aborted status.

Upload Results to BaseSpace with Properties

For upload, place output files into:

All data in the data/output folder will be uploaded to BaseSpace when the App returns an exit code of 0 which lets SpaceDock know that the analysis is Complete.

A Native Application must always create an AppResult in the output folder, please ensure that a folder for at least one AppResult is created in that folder.

Each AppResult that is created can be individually tagged with Properties. Properties are important because they give the user more information about the analysis, each AppResult should always contain the inputs that were used to get those results. For instance, if Samples were used as input, the AppResult(s) created should be tagged with the input.samples Property indicating which Samples were used with which result. There are some conventions that developers can follow to allow SpaceDock to automatically tag their results with some input data, this will be described below.

If the app takes one or many Samples or AppResults as input but produces only one AppResult each time, that AppResult will automatically be tagged with the input.samples and input.appresults Properties from the AppSession that is created when the form is submitted.

If the name of the AppResult is the same as the name of an input Sample, SpaceDock will automatically tag that AppResult with the input.samples Property and the id of the Sample within it.

In the above example, we have included the following information which will be added to the AppResult's metadata in BaseSpace (this is very useful for users and for future apps that may was more information about the analysis):

For more information about Properties, please refer to Properties in the Rest API Reference, Properties can be free-form but there are some conventions to follow that will designate Properties as certain resources in BaseSpace, e.g. if the Type is sample, sample[], appresult, and appresult[] the Property will be read as a BaseSpace Resource, these are described more in the link above. For more information about AppResults, please refer to AppResults in the Rest API Reference. 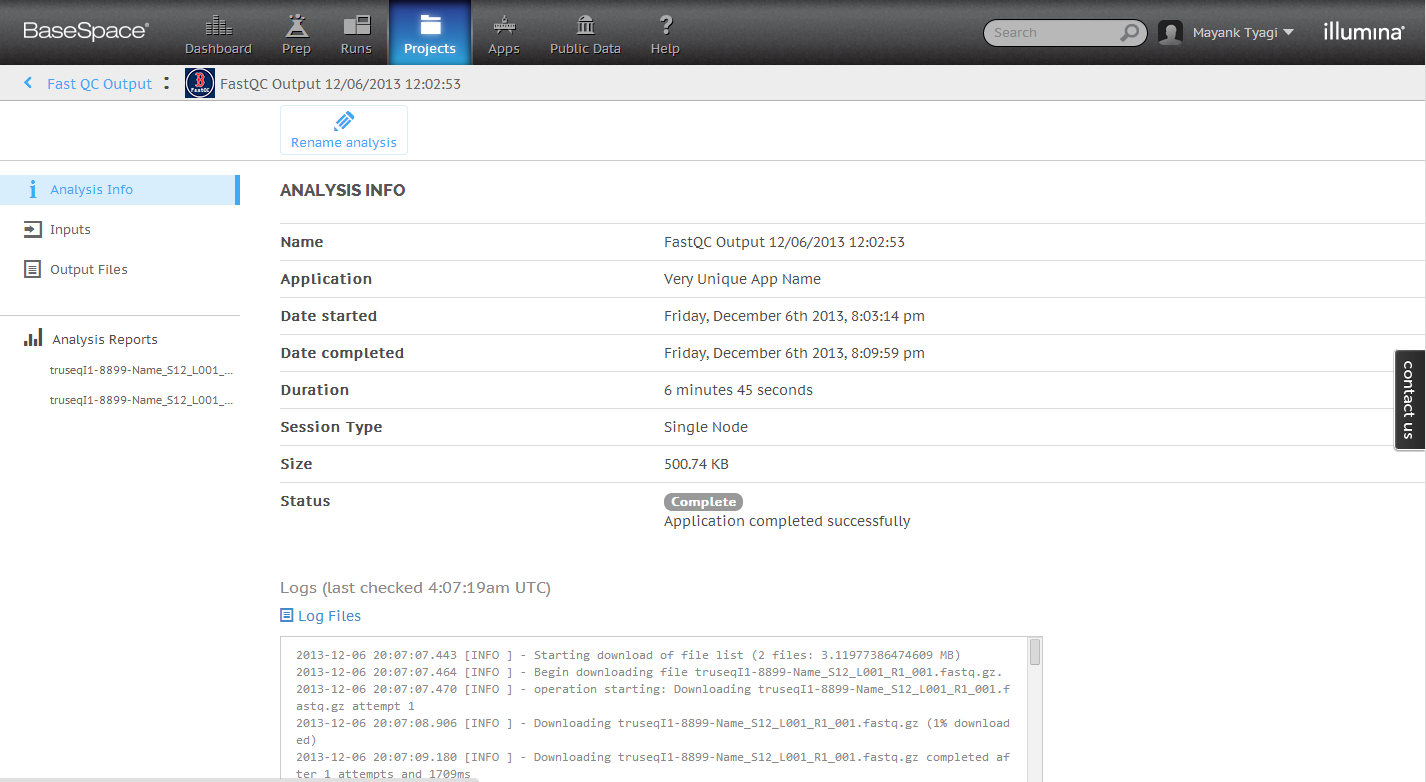 In addition, the genomes folder in the Amazon Machine that runs in BaseSpace (instead of locally) has a more robust collection of reference genomes.

The genomes folder can be duplicated on your Docker image by following the Adding Files to your Image.

How to determine which genomes are available

In order to determine what genomes are available for an application, we have created a Docker image that you can run in your account. When launched as a Native app, this Docker image will output a text file with the full structure of the genomes drive.

In order to view the full genomes drive, you must run the application in the BaseSpace Cloud Infrastructure. The VM that we provide has a limited genomes drive with only select genomes available.

The docker image can be pulled down with the following command:

After the callbacks.js script is configured, simply go to the form for your application in the Form Builder and launch the application.

The output of the application will be a genomes list file.

In some cases, an app may need to use scratch space while it is computing. This is available within BaseSpace in the data/scratch folder. The other directories have limits on how much data can be added, which can cause the app to fail, so please use the scratch folder in all cases.